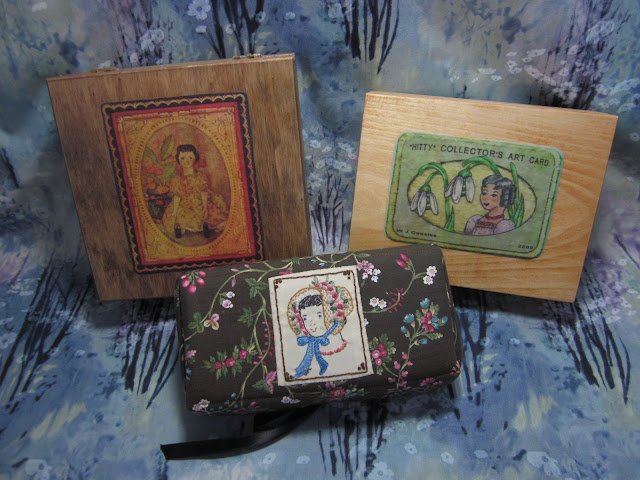 Hitty is the original travel doll, making her way over 100 years halfway across the world and back.  A doll with so many frequent flyer miles needs a nice keepsake box to stay safe on her travels. 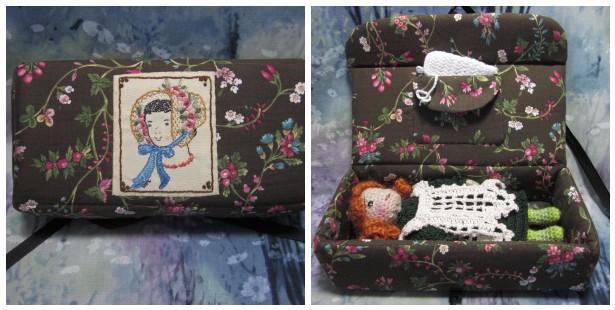 This travel case is from a Gail Wilson kit, which you can find here:

Scroll down to about midway on the page to find this kit.  It has everything you need to make one case.  I used a graphic from Pinterest for the embroidery on the front of the case, but Gail has an embroidered nameplate for this case.

It has a small pocket flap on the inside for stowing small Hitty treasures.  The design is a marvel of engineering cleverness and is simple to construct. 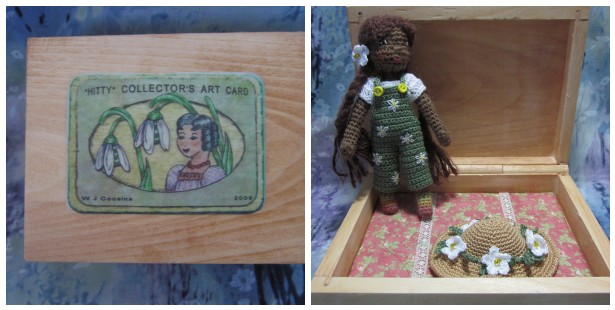 The next two keepsake boxes were made from unfinished wooden boxes I found in my stash...can't remember when I purchased them or what I planned to do with them, but they were a nice size for Hitty.  This one, sadly, is a bit shallow on the inside.  I planned to line both the bottom and the top of the box with padded cardboard and straps to hold clothing, but then the lid wouldn't close with Hitty in it!

Removed the top padding, and now she will fit :-)  The lid has a Hitty graphic gleaned from Pinterest that I printed on to cardstock from my printer.  It is decoupaged onto the lid using Mod Podge.  Here is a good tutorial for using Mod Podge for decoupage:

I used five or six layers of Mod Podge on the lid, sanding lightly after the second coat, then used three layers on the rest on the rest of the box, sanding after the first and second layers. 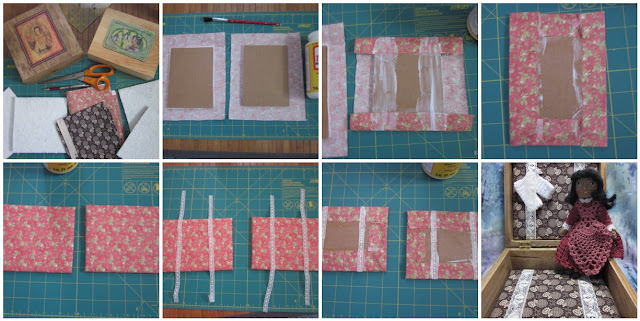 I cut two pieces of sturdy carboad 1/4 inch smaller than the inside dimensions of the box I wanted to line.  Glue Warm&Natural batting to one side of the cardboard, then lay the padded board on top of the lining fabric.  Cut the fabric and inch or so larger all around than the board, then glue the fabric to the board from the back.

The straps are pieces of cotton lace, glued to the back side only.  Once done, glue the padded and lined pieces into your box.  As I said, the first one I did was not quite big enough on the inside to accommodate two padded boards.  The second one, shown in the last image, worked perfect. 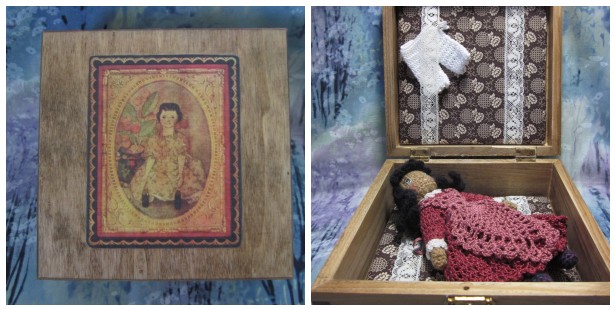 My last box, another decoupaged wooden box.  Both of the wooden boxes where stained before decoupaging.  I used Minwax Golden Pecan for the first box, and this one is stained in Walnut.  I like the walnut color with the image used for this box.

Wooden boxes are available at your local hobby and craft store; Michael's carries them.  You can also find them online.  It is easy to give your Hitty a sweet and safe Keepsake box for traveling and keeping her treasures safe :-)
Posted by Beth at 11:18 AM 8 comments:

A wardrobe for Crochet Hitty 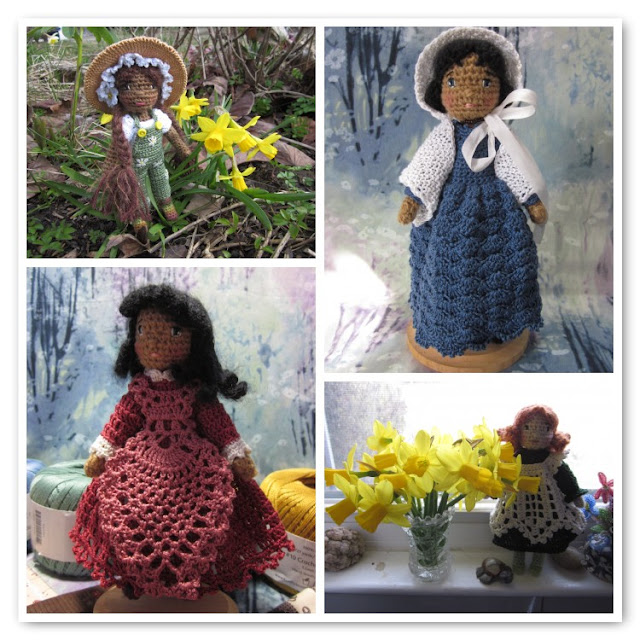 Joyce's crochet Hitty (pattern here) has inspired me to make her several outfits.  All of them are crocheted from size 10 crochet cotton, and a size 7 or 8 steel hook.

In previous posts you can find a camisole and bloomers, and a nightgown, for this dear crochet Hitty.  Here are some additional patterns for Hitty: 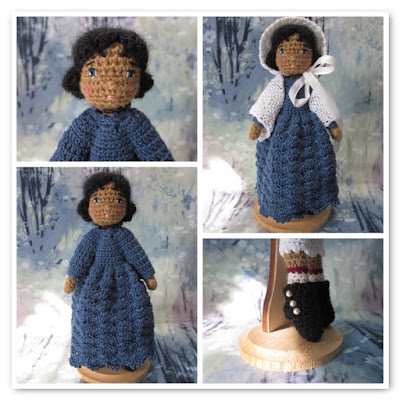 The pattern for Hitty's Quaker dress is here:

For the bonnet I used a pattern that is freely available on the HittysKnittys yahoo group, and the shawl is a simple garter stitch knit pattern from Lionbrand yarns, knit in size 10 crochet cotton and size 0 needles. 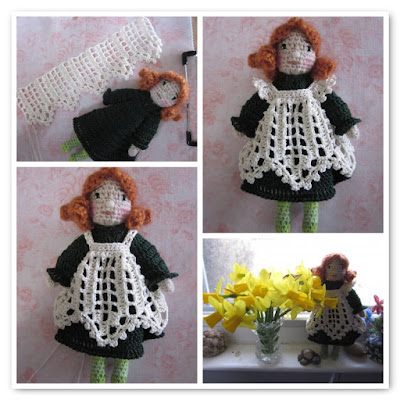 This pattern is for a simple A-line smock dress with long sleeves, and shows you how to make a pinafore from any crochet lace pattern worked side to side. 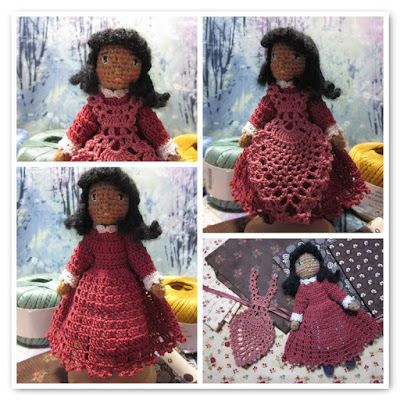 This pattern is for a waisted dress with full skirt and long sleeves, with an apron crocheted in a single pineapple motif. 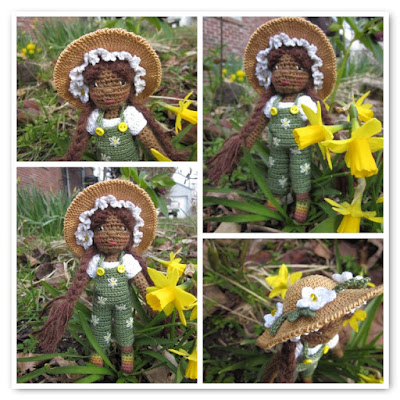 For your tomboy Hitty, a Tee shirt, overalls, and sunhat.

All of these patterns, with the possible exception of the overalls, should fit not only your crochet Hitty, but other slender bodied Hitty's as well.  If you want to make the overalls for your wooden or cloth Hitty, you may need to alter the depth of the crotch to accommodate the leg hinging, and the width and length of the pantleg to accommodate slightly larger legs.

All of these patterns can also be found on the left sidebar of this blog under Crochet Hitty by Joyce. 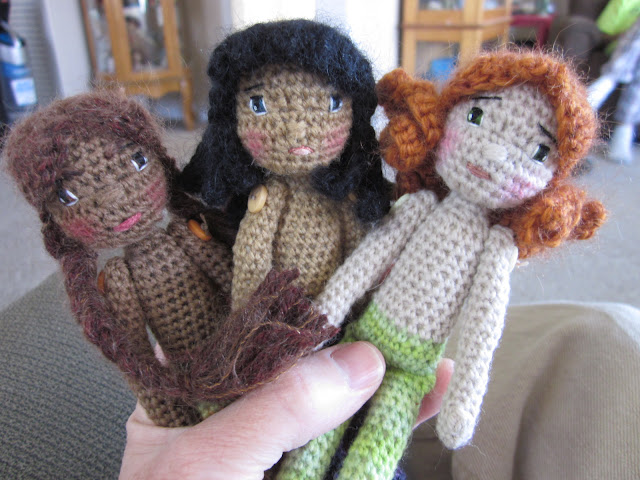 I have been happily employed making Hittys from Joyce's wonderful Crochet Hitty pattern, which you can find here:

Here is a nightgown pattern to share as well; the flowers are crocheted with size 12 perle cotton, which is pretty fine.  I used an Irish rose pattern and a simple forget-me-not pattern from my pattern stash.  You could use your own favorite flower pattern, or embroider or silk embroider the flowers, or simply tie a silk ribbon to the front. 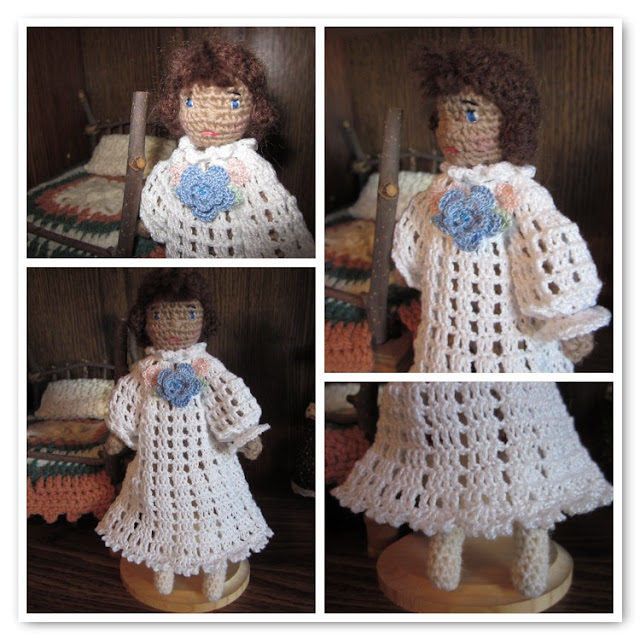 And all of my Hittys are looking for a new home! 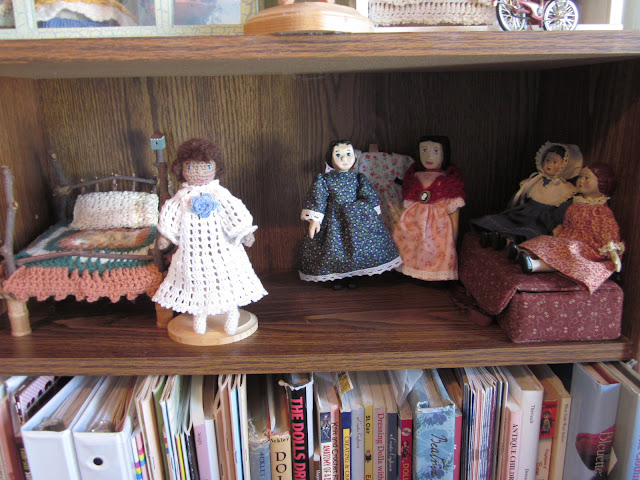 After moving the books off the top shelf, the girls think this will be a perfect place!