Dolls for the Christmas Bazaar 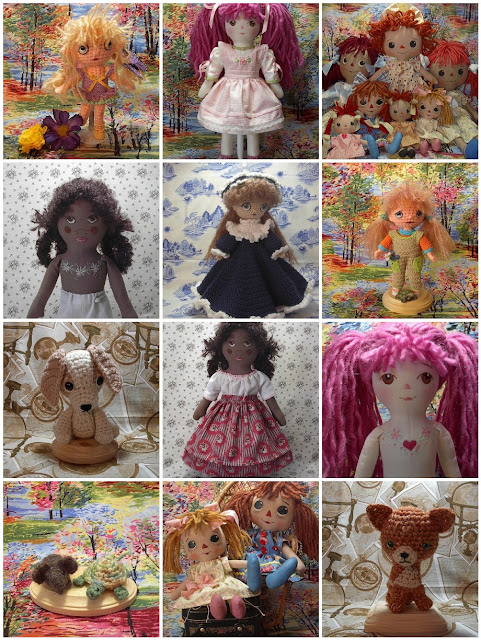 Every year, High Street United Methodist Church in Muncie, Indiana, has a Christmas bazaar in November.  This year, the bazaar is November 6 from 8:00am to Noon.  The church is located at 219 South High Street.

For the last few years I've donated several dolls that were made during the year to this bazaar.  Above are a few of the dolls donated this year.  There are lots of other neat items, and some delicious baked goods...I know this because my Mother donates her marvelous goodies to this bazaar.  Her brownies are impossible to beat :-)

I sang in the choir during my teenage years in this church.  When I was in college, I learned to my horror that during a brutal blizzard, a gas main exploded and nearly destroyed the church.  The entire inside was gutted, all the stained glass blown out, the doors blown off, and it took three hours to get the fire under control.  Amazingly, no one was injured, in spite of the fact that a young man lived at the church as a caretaker.

A year later Christmas midnight services were held in the barren, unheated shell of the church.  Work was under way to rebuild, but this midnight service was conducted by candlelight, the only illumination.  We sang all the beautiful Christmas hymns in the cold, still structure, and truly the magic of Christmas touched us all.

The following year, Larry and I were married in this church; the second marriage service conducted in the newly restored building.  We've been together ever since.

Many very good memories remain to me of this structure and congregation.  Many extended family members belong to this congregation; the picture below was painted by my Great Uncle Orla and is a lovely and loving representation of High Street United Methodist Church. 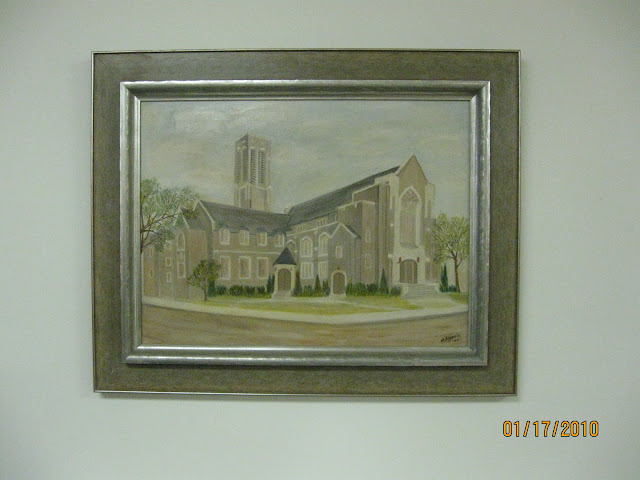 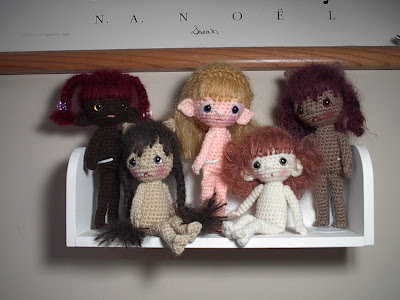 No, it isn't as perverse as it sounds; WIP's are Work-In-Progress :-)

Paton's Astra sportweight/dk yarn is the perfect yarn for making the little Pocket Spirits, and I had to have skeins in all of their many flesh toned colors.  And then, of course, I needed to make a doll out of each of the colors, and give them all different hair styles.  This yarn is a pleasure to work with, it is soft without splitting, and works up nice and tight so no fiberfill shows through the stitches.  Find Paton's Astra here:

They are all sporting hair using Nashua Hand Knits, Creative Focus Kid Mohair yarn.  This is a wonderfully 'hairy' mohair yarn, and you can find it here:

Now to get them dressed :-) 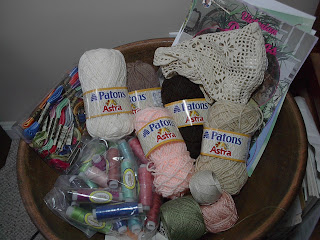 A new look, and a new doll 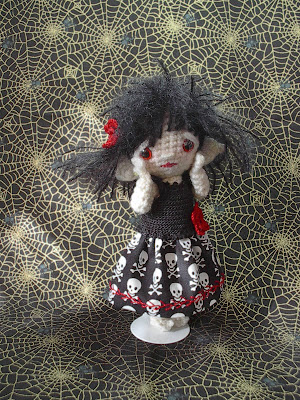 After over a year, I felt it was time for a new look.  Something a little brighter, and that would make finding the patterns available on this blog a bit easier.  What do you think?  What I like is the way the sidebar items are grouped together.

Please meet Nightshade, my little Goth Pocket Spirit.  The dress was very easy, and a fun way to easily incorporate a piece of favorite fabric in a crochet outfit.  Just crochet a top; cut a piece of fabric 10 inches by 2 or 3 inches (depending on how long you want it).  Zig zag stitch around all four fabric edges to keep it from fraying.  Turn up and press 1/4 inch for the hem and the two short sides; stitch two rows of gathering stitches (either by hand or with a long machine stitch), along the top edge, 1/8 and 1/4 inches from the top edge. 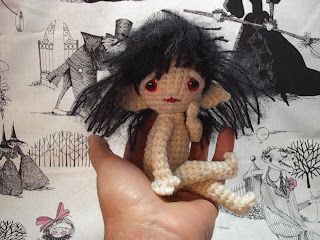 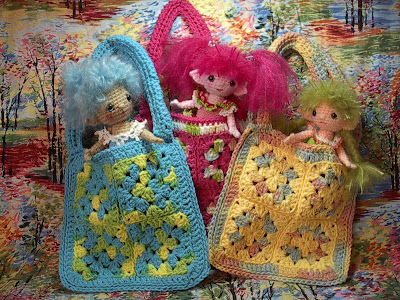 For my nieces for Christmas; Pocket Spirits with their own pockets!  The pattern for the granny square bags is available free from the Lily Sugar & Cream website:

They have some wonderful free patterns, including a great crochet doll, named Lily (of course!).

The ballerina outfits are from the Annie Potter Presents leaflet "Tu Tu Angelic."  I used my own design for the body suit, but the ballerina embellishment came from Annie :-) 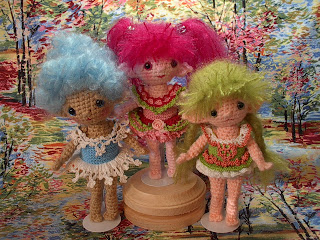 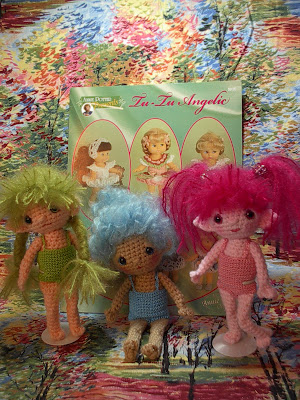 These three little Pocket Spirits are a work in progress for my nieces for Christmas.  Meet Willow, Skye, and Cherry :-)

Since my nieces all take dance lessons, these little spirits are going to get some sweet ballerina costumes from an Annie's Attic publication called Tu Tu Angelic.  The body suit used with these patterns did not fit well on the Pocket Spirits, so I designed one that did.  The pattern for the body suit is here:

This pattern can be used as a swim suit just as it is, or attach a skirt to it; add sleeves and wear it under a jumper or overalls.  It is a snug fit, so you'll want to try it on as you crochet to make sure it fits.

I plan to use the embellishments from the Annie Potter Presents publication with the new bodysuit.  We'll see how well it works! 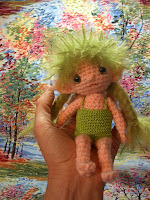