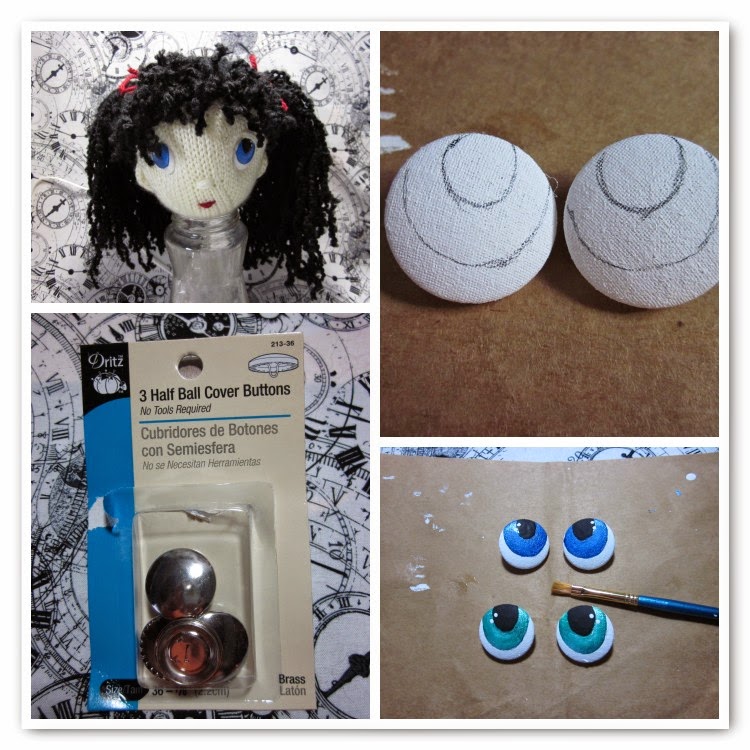 Back to knitting dolls!  I've been smitten by a free doll pattern on Ravelry, by the very talented Deena Thomson-Menard.  The doll pattern is Lottie, and as mentioned, is freely available on Ravelry.  I started a KAL at We Make Dolls, but wanted to try out some tweaks to the pattern, so started a second doll, which is Rachael.

One of the things I was thinking about was eyes, and how to make them myself.  I had several packages of covered button forms, and made up two pair of eyes using them.  I like the way they turned out, and created a tutorial:

Mine were made with 7/8 inch buttons, but you can use any size you want.  All you'll neeed are the button forms, some scraps of white cotton fabric, acylic paints in white, black and iris color, and gloss or satin acrylic varnish.   These eyes would work for any doll or animal, in cloth, crochet, or knit.

As for Rachael, I used size 4 dpn's to knit her body, instead of the 7's called for in the pattern.  The yarn is Caron Simply Soft, which I do not like for crochet, but it knits wonderfully.  I wanted a smaller doll than the original, so I took out eight rows from the body, and will take eight rows out of her legs and arms (I think). 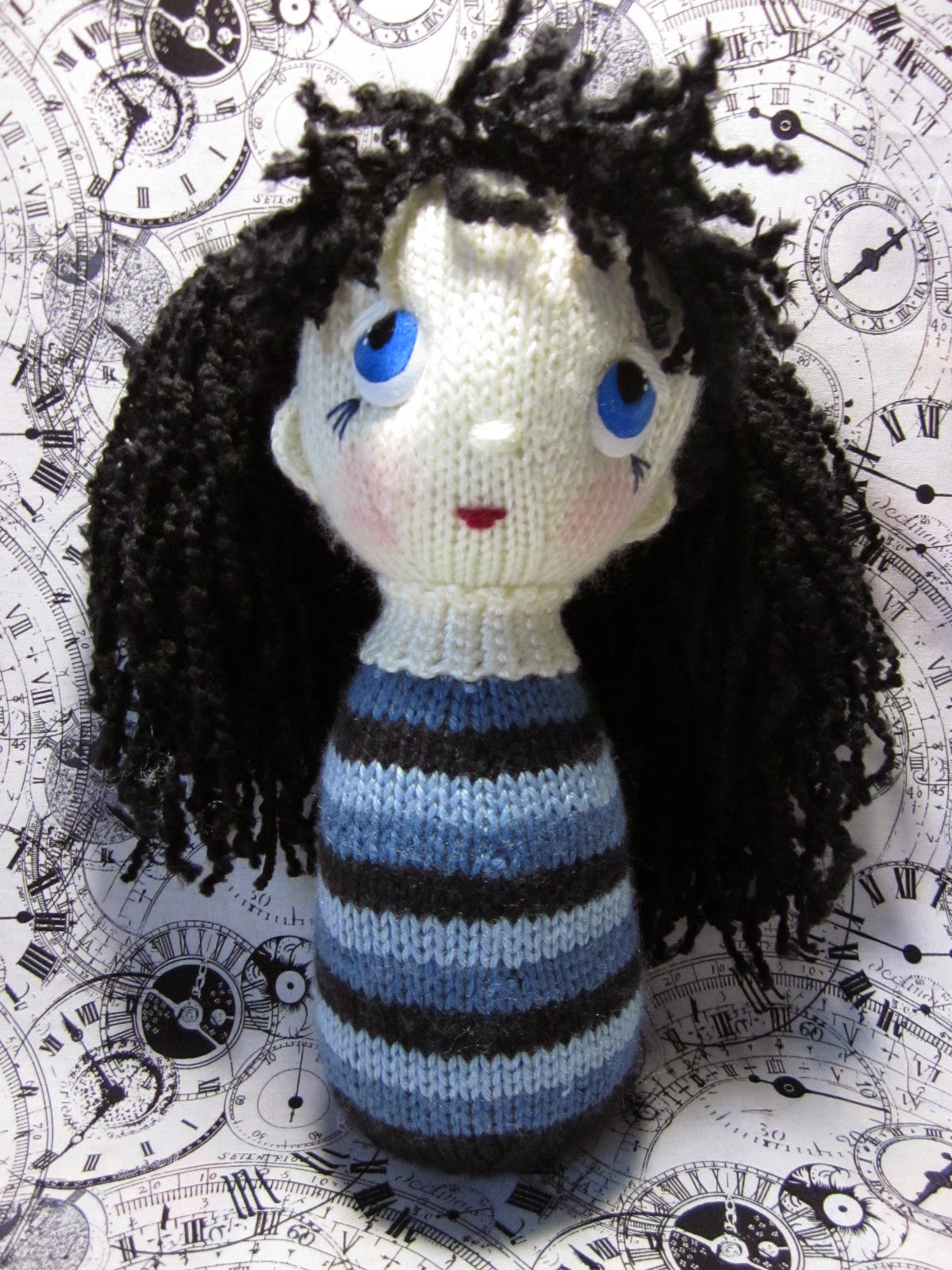 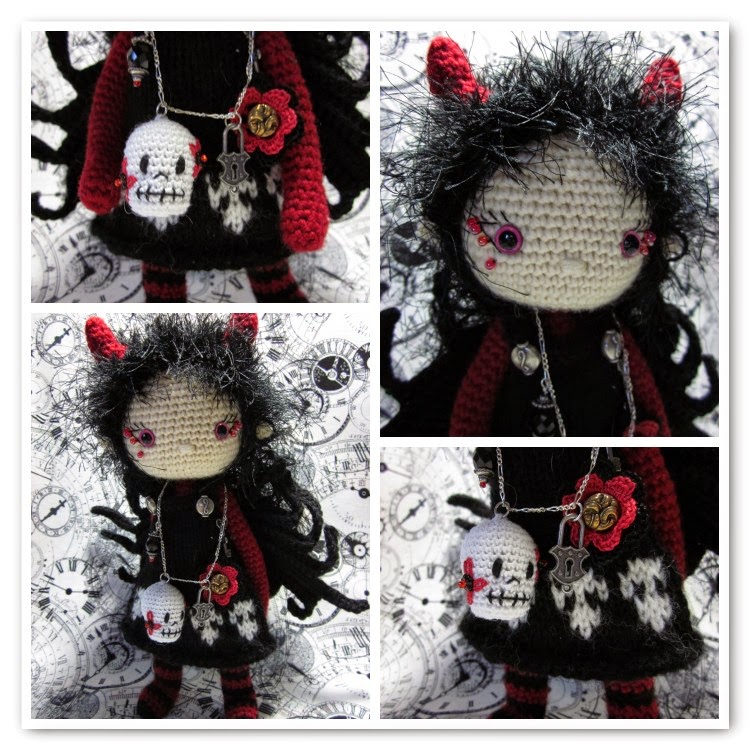 I had to give Angelique a few more Demon touches, including a knit dress with a skull motif around the border, and a neckchain of demon trinkets :-)

The neckchain idea came from this blog:  http://www.insidecrochet.co.uk/patterns/day-of-the-dead-bracelet/
I used a skull pattern from the Lionbrand site, and an Irish rose of my own, but the idea was all hers. 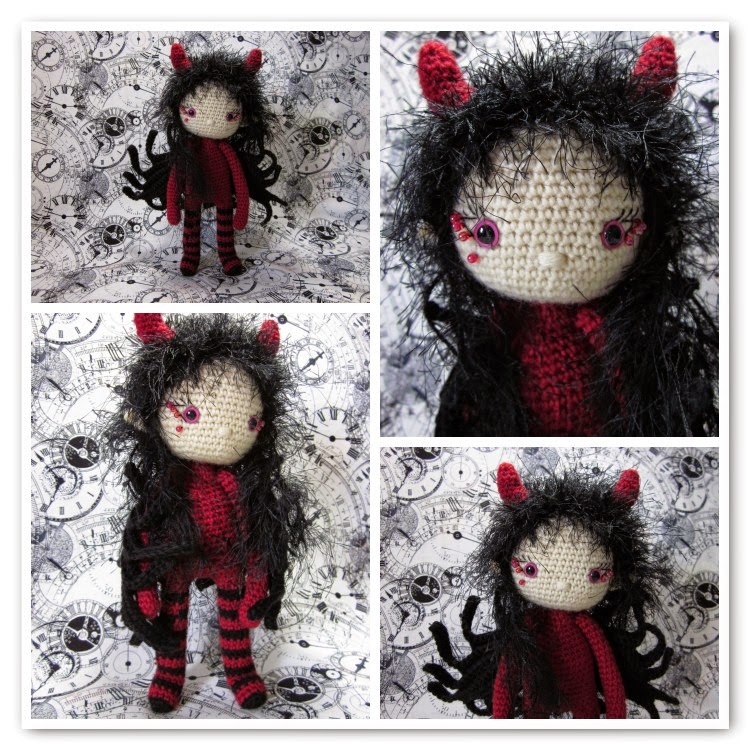 Demonchilde born of Flame
Perilous to speak thy name!
Earning credits to enter Hell
On Demonwings dark and fell.

Do you have an Angel near
To pray for thee; to shed a tear?
Do you have a soul to save
From the bleak undying Grave?

Demonchilde, come to Me!
And tell me if its Hell you see
Or Heaven on that distant shore
Of deathless dreams forevermore.

Just in time for  Halloween, some Demon Details that you can add to your handmade doll.  I started with Isabelle Kessedjian's My Crochet Doll, and added horns, wings, and a few facial touches.  Voila!  A Demonchilde!

Check out these Demon Details for yourself :-)

I plan to knit her a black jumper festooned with skulls along the bottom, but I didn't want to wait that long to share her!
Posted by Beth at 1:36 PM 18 comments: