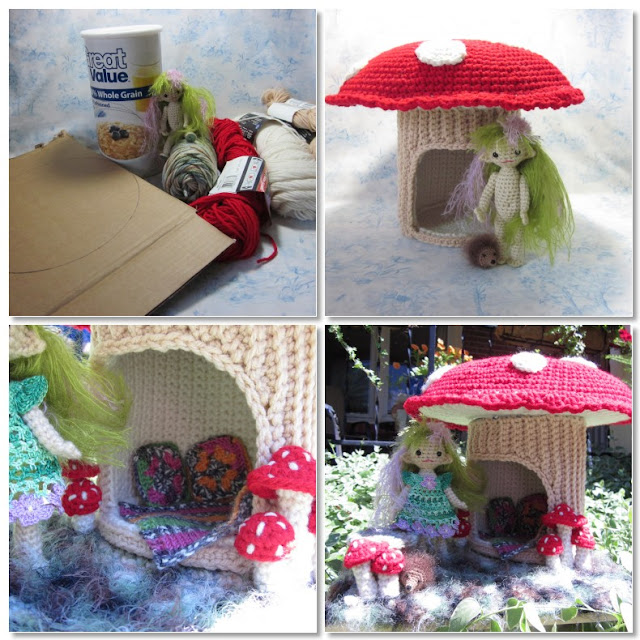 This is a project I made back in 2013, which I put on Ipernity.  Since then, I've returned to Flickr, and the tutorial for this is no longer available in Ipernity.  I've been asked by a couple of folks what happened to it, so I've finally put the tutorial on Flickr.

It is primarily a picture tutorial, with no written instructions.  The crochet is done by fit, as you go along, but there are plenty of pictures to help you.  You can find the tutorial here:

The Manor is sized for small dolls, about five inches tall.  It was originally made for my Forget-Me-Knot dolls, but Nancy Ann's and tiny BJD's will be quite at home here as well.

Some of the little embellishments are available on this blog under Crochet An Outdoor Setting; just scroll down the left sidebar until you find it.

The child in the park 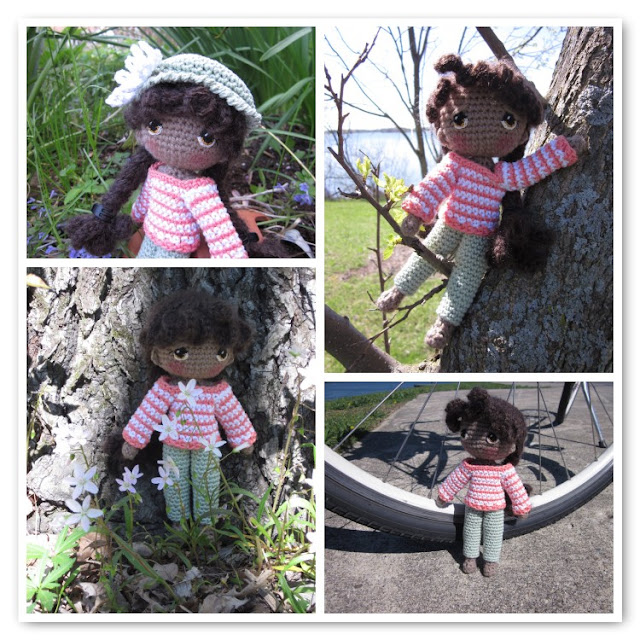 She was probably seven or eight, and walking with her Dad.  Well, she was skipping, and hopping, and jumping, and twirling...scuffing her feet along the walk and stopping to inspect the dandelions.  Children don't just walk, and I wonder when we lost the habit of their joyous form of locomotion.

She had skin the color of cafe au lait, and was wearing a striped tee shirt and cargo pants, with a newsboy hat pulled on over dark brown hair caught up in long braids.  She made quite an impression on me as I rode by her & Dad on my bicycle.

So here is Daisy, my tribute to this lovely, unknown child in the park.  I used the Yun Shu pattern, freely available on Ravelry.  I used Patons Astra in Medium Tan for her skin, and Knit Picks Palette in Grizzly along with a laceweight mohair in dark brown, held together, for her hair.   Her outfit is crocheted with size 3 crochet cotton.

And we did go to the park!  One of our State Parks, Summit Lake, on the eastern side of the state. 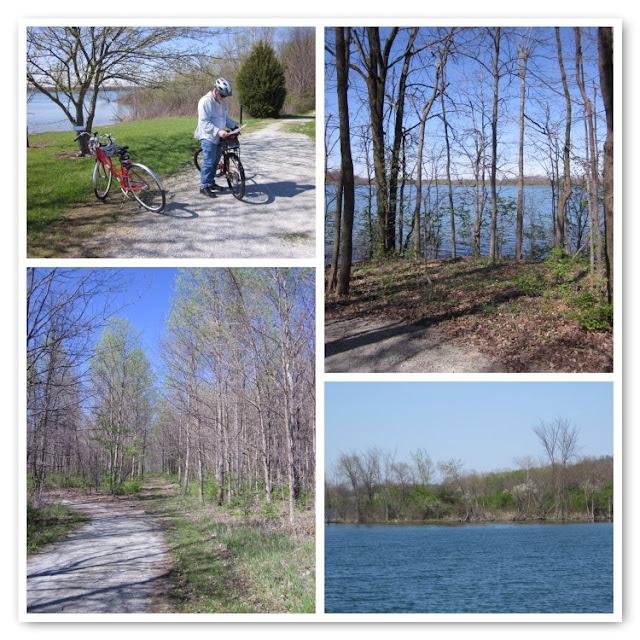 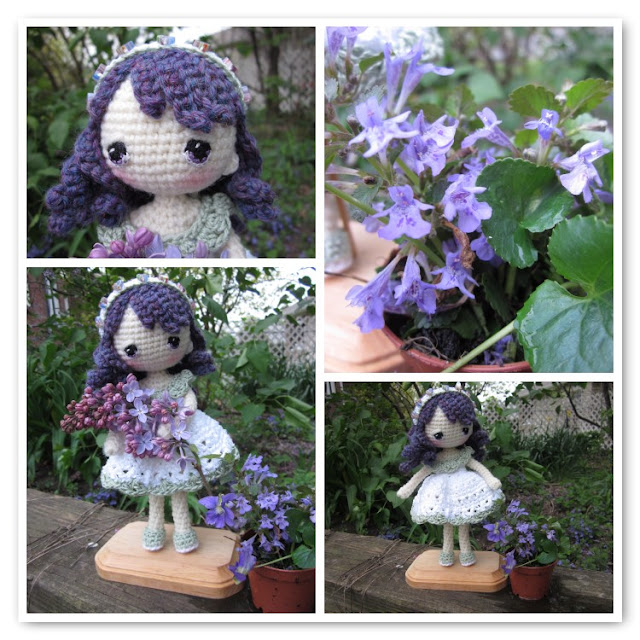 Lavender is the second doll I've made from the wonderful (and free!) Yun Shu pattern, available on Ravelry.  She is just eight inches tall, and has lovely lavender hair (Knit Picks Wool of the Andes sport in Sprinkle Heather).  Her body is worked in Red Heart Super Sport; I don't know if they still make this yarn...I've had this in my stash for a couple of decades.

Her dress is a size 3/sport crochet cotton, and her eyes were crocheted from this wonderful tutorial:

Lavender loves all things purple.  Sadly, all of my lavender has died out over the years, but we found lilacs, violets, and bugle weed.  We will replant some lavender this spring, for sure! 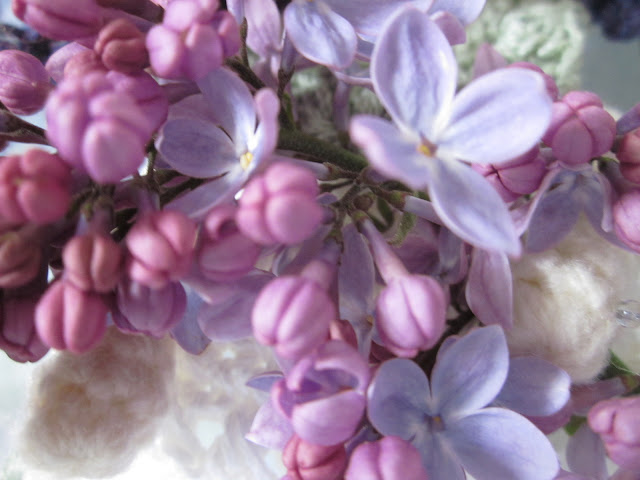 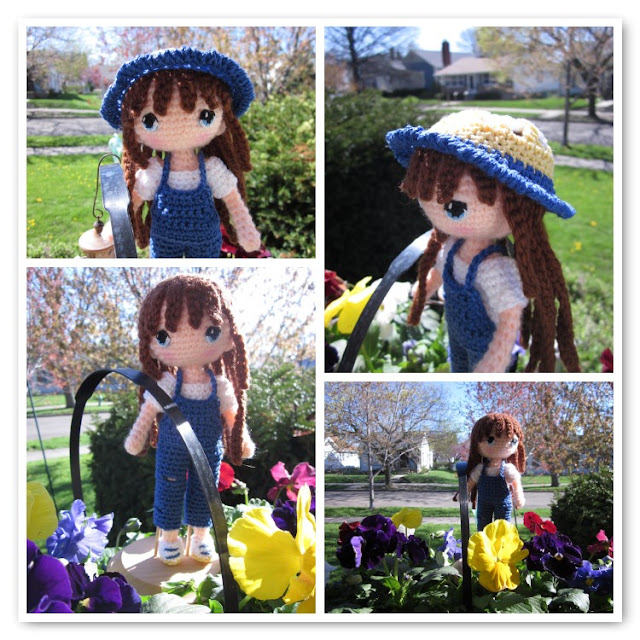 Columbine was made from a wonderful crochet doll pattern which is freely available on Ravelry.  The pattern is Yun Shu.  She is crocheted in sport weight yarn with a size C (2.5mm) crochet hook.  She stands about 7.5 inches tall. 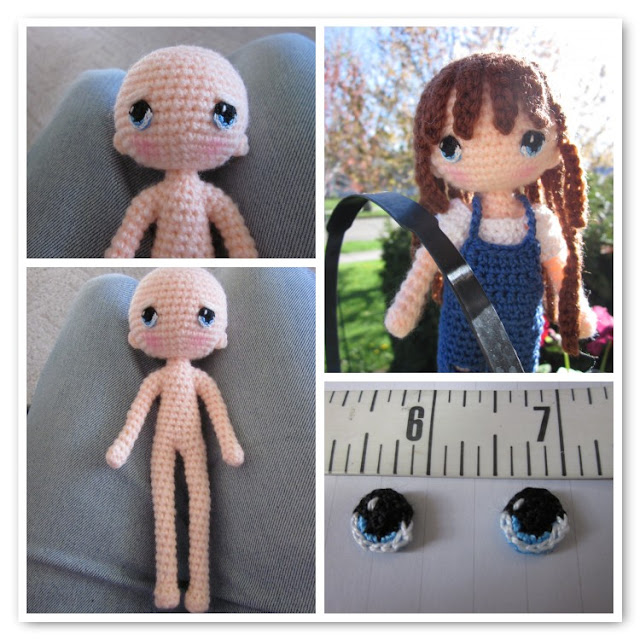 As you can see, she is a very slender-bodied doll, so she is easy to dress by pulling her clothing up over her feet.  Her eyes were made from this wonderful crochet eye tutorial; the best I have ever seen for making eyes like this:

I made Columbine's eyes with size 8 perle cotton and a size 7 steel hook; they turned out about 3/8 inch in diameter.

I made a few tweaks to the pattern, so she would be a bit easier for me to make.  Following are the changes I made to the pattern:


1. I eliminated the foot and added one stitch to the width of the leg up to the second increase, then worked per the pattern.

2. I added one stitch to the width of the arm.

3. I did not use a wire armature; instead, I stuffed the legs as I crocheted, after each six or seven rows up to the hips. If you want the doll to be able to sit, do not stuff clear to the top of the leg...leave a little space with no stuffing so the legs can move freely.

4. For the arms, I stuffed a ball of stuffing in the end for the hand, then did not stuff the rest of the arm.

5. By adding a stitch to the width of each arm, I ended up with two extra stitches at the shoulder. Decrease these out in the first decrease row after attaching the arms, then work the shoulders as written.

6. For a move-able head, I worked the shoulders down to eight stitches, then worked several rows on these eight stitches for a neck stub (to fit up inside the head)

7. For the head, I left a hole at the bottom (neck end) of the head eight stitches around, then worked the head as written. I stuffed the head through this hole; it is small but doable.

8. For the eyes, I used this wonderful eye tutorial. I used perle cotton size 8 for the eyes, and the eyes ended up being about 3/8 of an inch across.
http://hodgepodgecrochet.net/2015/07/how-to-crochet-eyes-for-your-amigurumi/

9. For the hair, I made a three-round wig cap of 8sc, 16sc, 20sc, then worked the strands as written. I used the extra stitch to make one more bang strand. 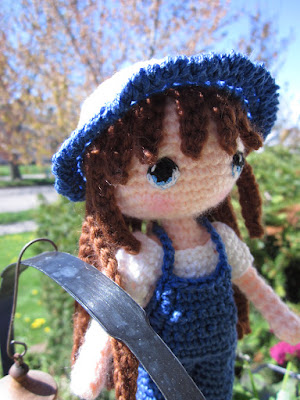 I can see clearly now... 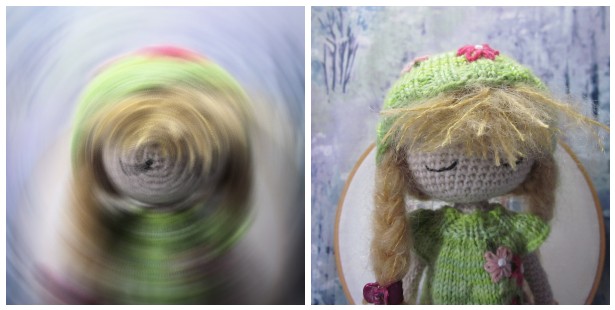 I had known for several years that I had a cataract in my right eye, but various circumstances, and my innate fear of anything medical, had me putting off cataract surgery.  Until now.  On the left is a fair representation of the vision out of my right eye (without the swirl effect, thank God!).  So, after my dear husband had this surgery back in November, and came through with flying colors, I gathered my courage and did the same late last month.

Whatever was I afraid of???  The surgery took about 40 minutes, with zero pain.  None, nada, zilch.  Actually, that can be a drawback because, except for the eyedrops four times a day, you can easily forget that you've just had a major surgical procedure.  Soon I will be tested for new glasses, but already my vision is so much better; no more fog in my right eye, looking much more like the image on the right side above :-)

I've been working on several projects in the last month.  Beatrix, above, and below in better focus, is another Jane Doll (pattern available on Etsy and Ravelry).  Her look was inspired by the sweet embroidered girls of LiliPopo: 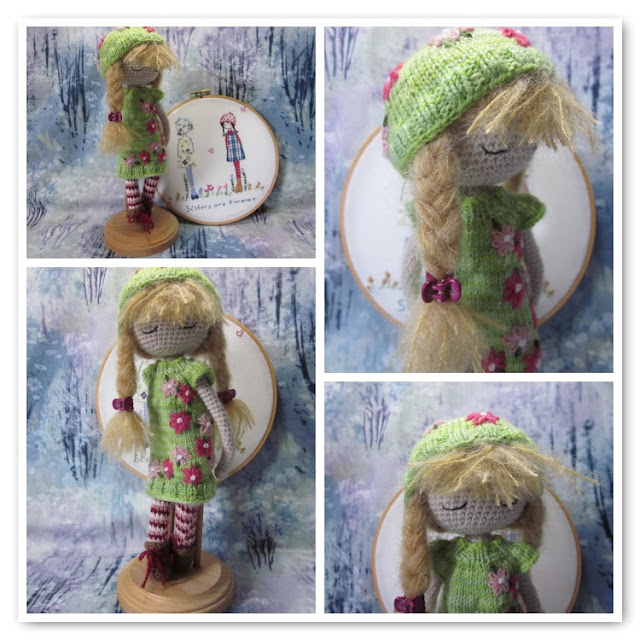 And, I also completed an embroidery for my sister's birthday 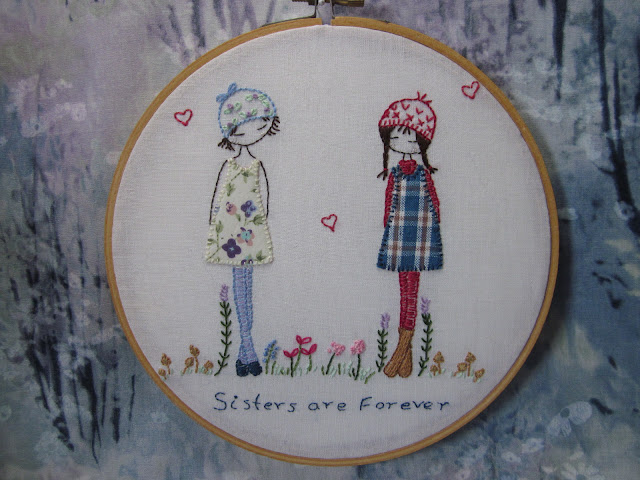 Plus some other special projects not quite complete.  I have another Jane Doll on the hook, and have become enamoured of another doll pattern (thank goodness it never ends!).

In spite of snow on the ground this morning, spring is here!
Posted by Beth at 1:07 PM 21 comments: