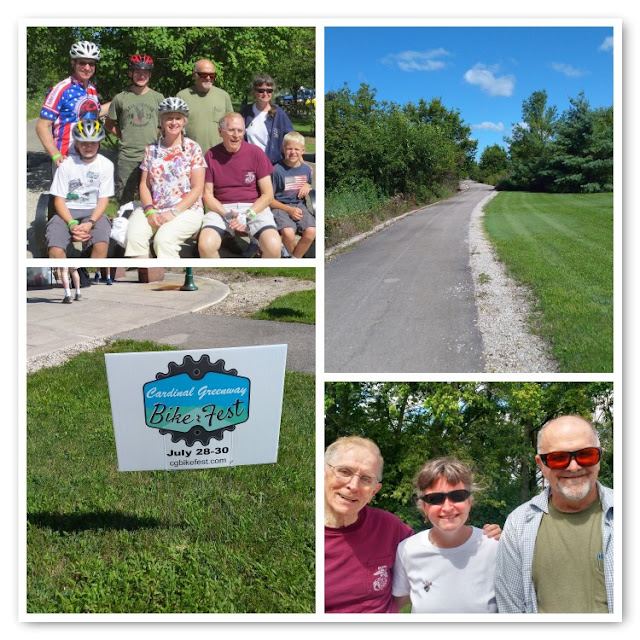 All images are courtesy of my brother and my husband :-)
Saturday most of our family participated in the Great Greenway Tour, along the Cardinal Greenway in Delaware county, Indiana.  The greenway is a wonderful Rail-Trail that stretches almost 80 miles, from Marion to Richmond, and all but 15 miles along the railbed.

It was a pure joy to ride in the country, enjoying the rolling and fertile farms.  The day was perfect, cool and dry with a beautiful blue sky.  My brother and sister-in-law, our nephews, my Dad, Larry, and I did 13 miles, then came home to enjoy carryout pizza! 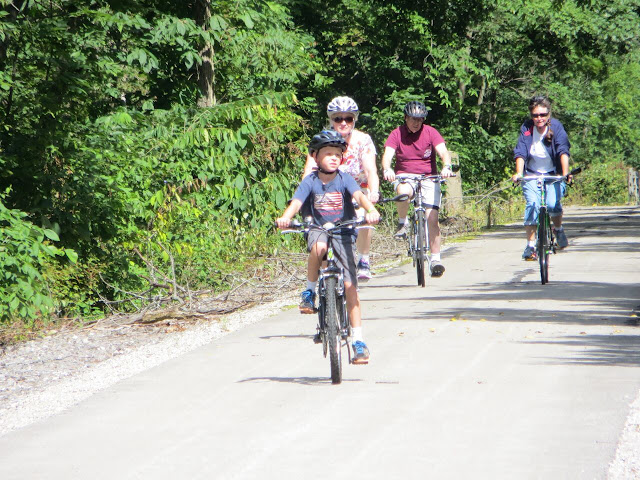 our youngest nephew leads the way! 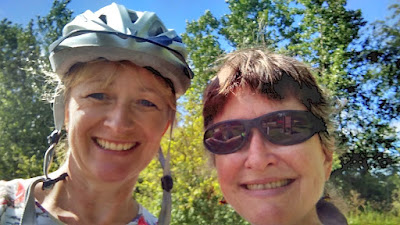 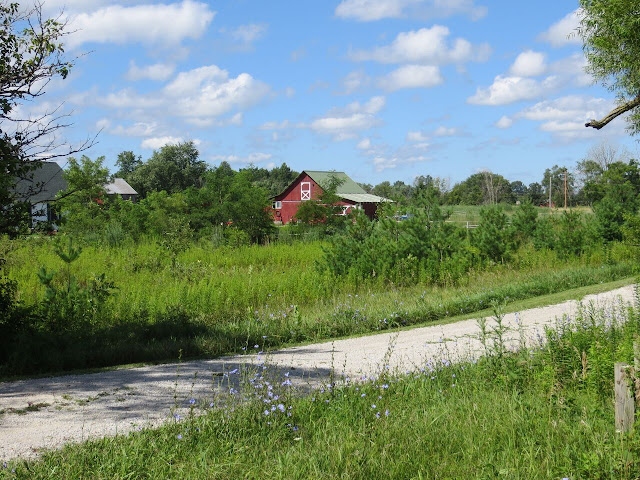 Farm along the trail

A great way to spend the day! 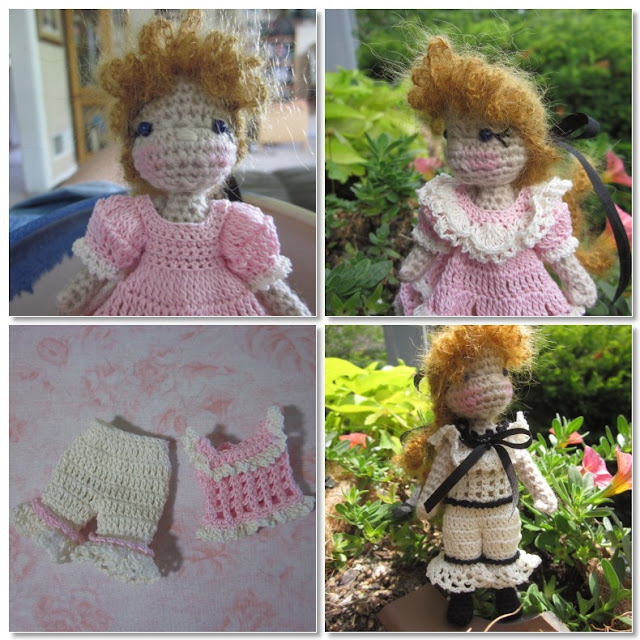 These were designed for 4 1/2 inch crochet mini Hitty, but should fit any similarly sized doll


If you like a somewhat more delicate look to your tiny crochet, consider using size 20 crochet cotton, or DMC perle size 8.  I work these threads with a size 9 hook, and it really is not much more difficult than size 10 thread with a size 7 hook.  It just takes a little getting used to.

The advantage of size 20 is more detail in your crochet, and also better drape in the garments.  What I want to share today is a pattern for some basic garment elements, but not a complete dress.  Why?  Two reasons:  you can use your own creativity in making a garment, as long as you have the basic fit of the bodice.   Secondly, the dress is not my original idea, but one I fell in love with on Pinterest.

The bloomers and camisole are my own, and include full instructions. 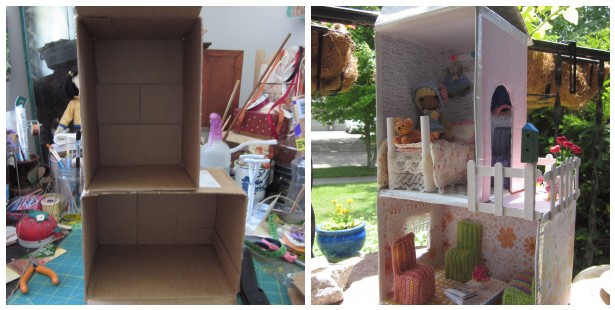 About once a year I get bitten by the cardboard box bug...hate to throw them away!  It is inspiring to look around and see how many different things can be made with cardboard boxes.

With the advent of multi-colored duck tape, the construction ends up being tidier, easier, and pretty good looking.  Of course, you don't want to sit on your construction...or leave it in the rain... or throw it at your annoying sibling.  But if you play carefully, you can have a dizzying array of doll houses for pennies, and a bit of your time. 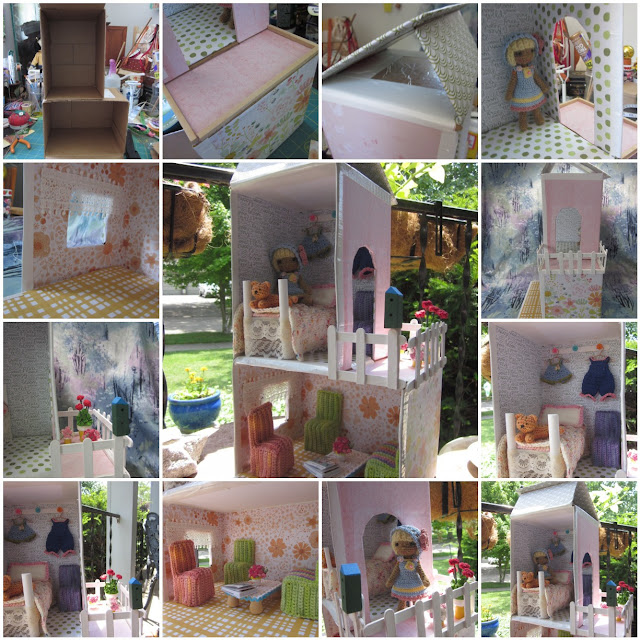 This two room cottage for Mini Hitty was made with boxes we get our vitamins in.  Since they come monthly, I have an impressive stash of boxes; probably enough to make a village! 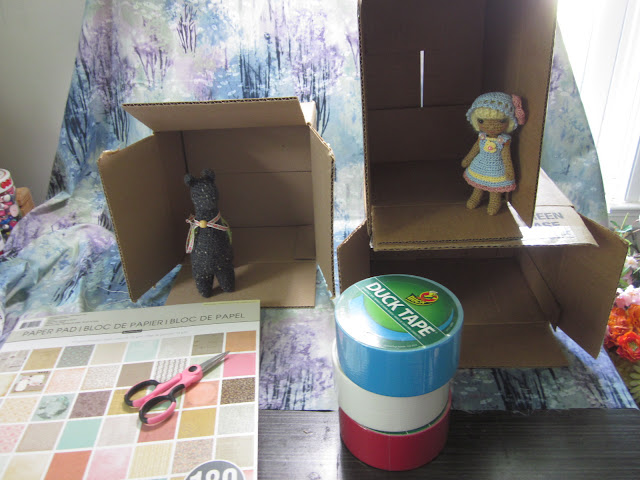 In addition to the boxes, I used scrap book papers and colored duck tape, both from Michaels.  Modge Podge for glue, and a couple of old paint brushes to apply the glue with.

I papered the ceilings first, then the walls and finally the floors.  I also papered the outside, then taped the first floor to the second floor with white duck tape.

I used the duck tape to cover all the raw edges of the cardboard.  If the tape was too wide, I laid it on my cutting mat and sliced it with my boxcutter the width I wanted it.

To support a craft stick fence on the balcony, I used lengths of basswood glued to the edge of the balcony, for the fence to then be glued to. 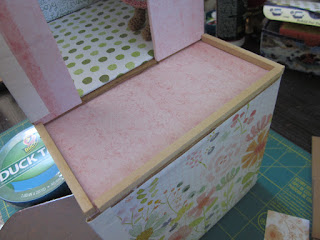 One of the box flaps was left attached to the upstairs, to form the front of the roof.  I used a bit of cereal box cardboard to make a rafter to support the top of the roof: 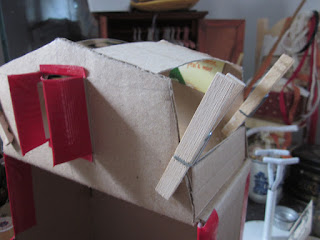 you can see it here on the roof of the barn; and this is what the finished roof looks like: 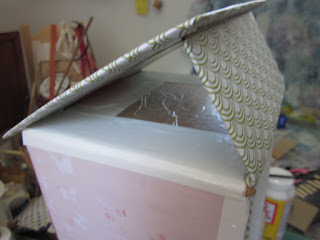 The living room furniture is made of a cardboard frame, then covered with a crocheted slipcover.   Instructions for making the chair and sofa are here:

The coffee table is a wood plaque with four small wood spools for legs.  I glued a piece of lace to the top of the table, then glued ric-rac around the edge (this was the hardest part of the entire construction!  the ric-rac would not stay put!) 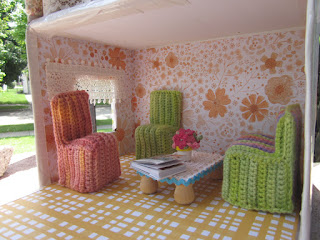 The bed is made from four clothespegs glued to a cardboard frame the size of the mattress.  To make the mattress frame stronger, cut two pieces of cardboard and glue them together, then glue on the clothespegs at the four corners of the bed.  One side of the peg is sawed off, so the frame fits onto the stub of the sawed off peg.  The bed is dressed with stash lace for skirting, and Warm&Natural cotton batting for the mattress and pillow.  The coverlet is knit. 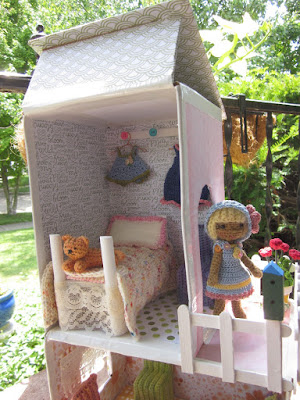 I added a peg rack made from a craft stick, with tiny wood spools as the pegs, covered with colored mini buttons.  Mini Hitty can hang her clothing here.

The LLama's needed a home of their own, so with one box and some red duck tape they now have a barn: 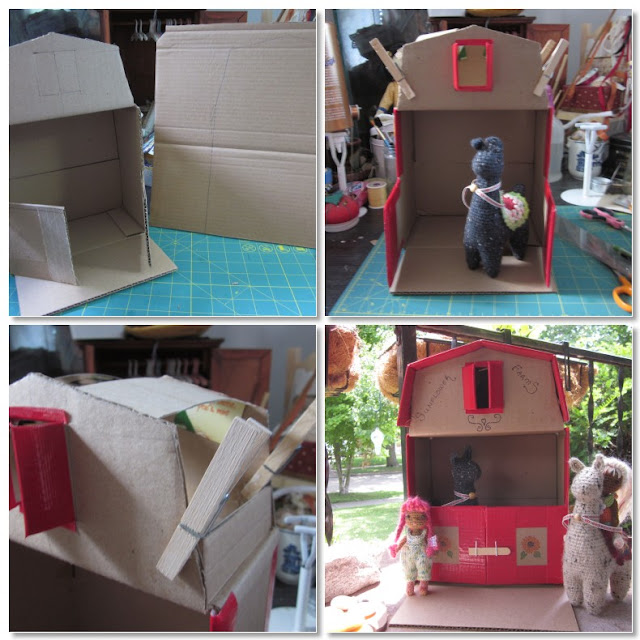 Instead of scoring the cardboard for the roof, I used the edge of my work table to crease it, then glued it to a cereal cardboard rafter.

Try to keep things simple and let the boxes do most of the work :-) 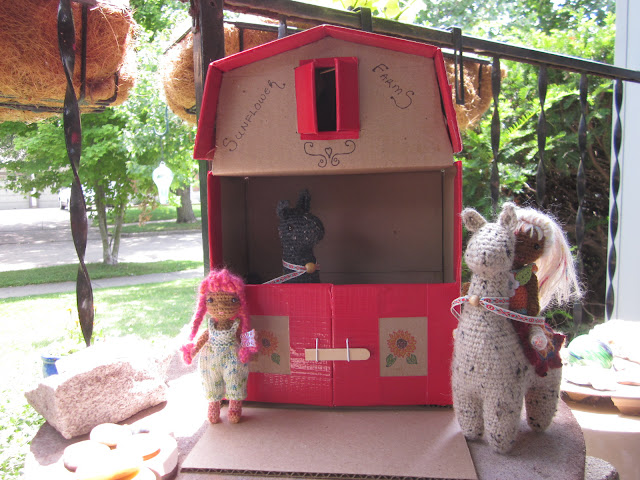