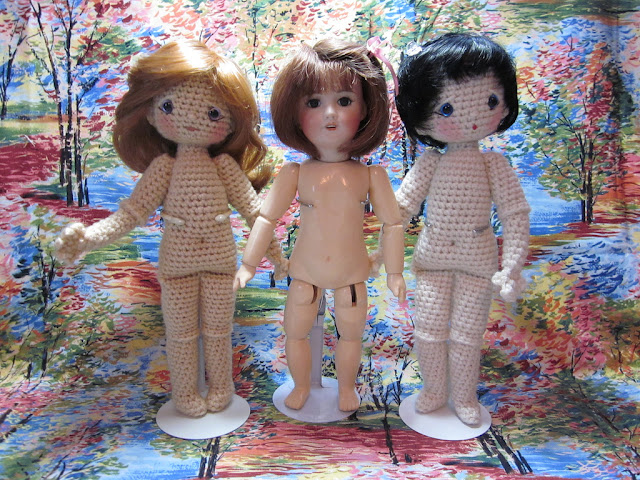 As mentioned in my last post, I've had the idea of creating a Bleuette doll in crochet for a long time.  Bleuette is a doll with quite a history, and an even more amazing wardrobe :-)

She started life in 1905 as a give-away (thats right!) promotion to little French girls to subscribe to a girl's magazine...La Semaine De Suzette, which translates as 'Suzette's week.'   The magazine's publishers were devout Catholics, and they were worried that the secularization of French public education would be detrimental to the development of young French womanhood.  Thus the magazine, and its aim to help promote their (the publisher's) ideals of what a young Frenchwoman's accomplishments should be.

One of these things was a proficiency with needlework and hand sewing, and Bleuette is the perfect little companion to sew for!  La Semaine De Suzette published hundreds of patterns, from 1905 thru 1960, for their little Frenchwoman, Bleuette.

There is a lot more to Bleuette's history, and her now incredible popularity.  In 1905, 20,000 Bleuettes were initially produced by the French company SFBJ, but 60,000 subscriptions were received before the first issue was even published!  Bleuette continued to be produced until 1960.  Now, many talented doll artist create reproduction Bleuettes.  The doll in the middle of the picture above is one such reproduction, by Jackie Chimpky.

Here is the pattern to create you own Bleuette in the medium of crochet.  I used a size D crochet hook and both Vanna's Choice and Red Heart Super Saver to make these dolls ;the Super Saver worked up slightly larger (and was harder on my hands!) than the Vanna's Choice.  This is a very tight gauge for worsted weight yarn; 5 single crochet  to 1 inch; but it creates a very firm fabric for stuffing and jointing.  Crochet Bleuette is 11 1/2 to 11 3/4 inches tall with her wig.

She is jointed using strong craft thread; two strands doubled (so you are passing four strands through the body...you need this strength).  Other supplies you will need are  a three inch dollmaking needle, 9mm acrylic eyes, and a plastic lid from a yogurt or cottage cheese carton to stiffen the bottom of her feet. 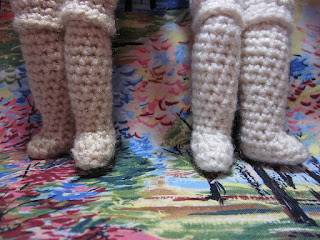 I used purchased wigs for this doll, in size 7, which is the head circumference.  Here are a couple of sources for wigs:

There are a number of online sources of information and patterns for Bleuette;  a Google search will turn up many.  Here are some of my favorites:

The Bleu Door  a free repository of many of the patterns published by La Semaine De Suzette, and maintained by Janie Hile

Bleuette Manikin  This is a wonderful free pattern offered by Judi Ward.  It is a simple manikin doll pattern with Bleuette's measurements, but it also makes a very charming, Bleuette size doll (without the joints).

Bleuette Sewing Club  This is a yahoo group dedicated to sewing for Bleuette. 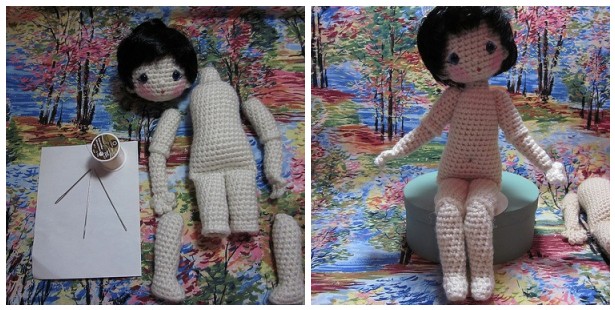 Grab a hook and some yarn, and make your very own little piece of doll history; enjoy the day, and enjoy the crochet :-)
Posted by Beth at 12:54 PM